‘The annual influenza outbreak came late this year, but hospitals are now seeing rising numbers of cases – many with the H1N1 strain responsible for the 2009-2010 pandemic’

Flu season is in full swing. The first week of 2019 saw a clear increase in confirmed cases, continuing an upward trend that began in December. Week two saw a slight dip but this is typically followed by several weeks of strong activity.

Data compiled by the WHO and the European Centre for Disease Prevention and Control (ECDC), show that GPs and hospitals are seeing more patients with flu-like illnesses. 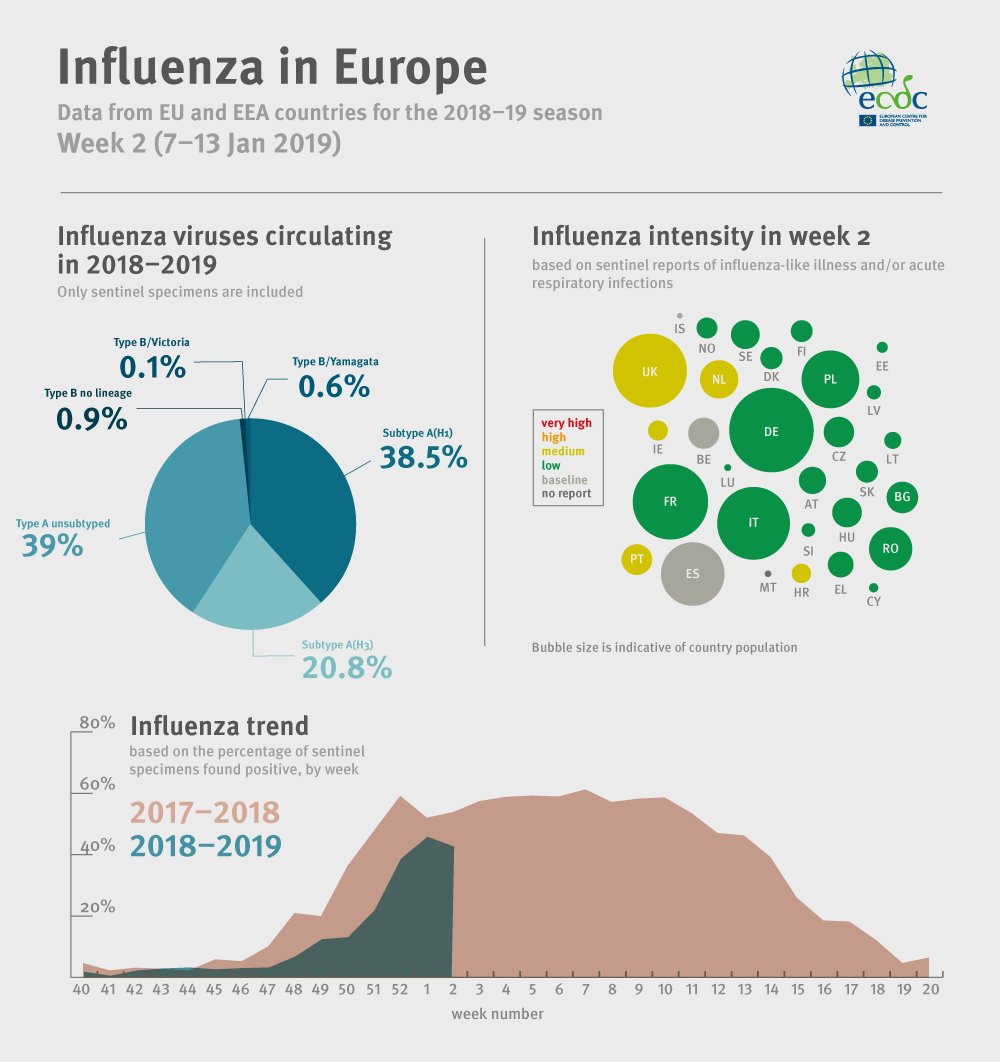 The number of cases is still lower than this time last year, suggesting that the outbreak has yet to peak.

In patients testing positive for flu, the most common strains (for those admitted to hospital and for patients who did not require hospitalisation) were both type A viruses – A(H3N2) and A(H1N1)pdm09.

Most of the hospitalised cases were associated with A(H1N1)pdm09 in people aged 15-64 years. This is the strain responsible for the global flu pandemic almost a decade ago. Then, as now, healthy adults have been hit hard by the outbreak. The two predominant strains match those covered by the flu vaccine. The components of the flu vaccine change from year to year. A group of global experts meet twice a year to discuss which strains are most likely to circulate in the next flu season. The next meeting to determine which viruses should be in the 2019-2020 flu vaccine will take place in Beijing, China, on February 18-20. Predicting when flu season will peak, or which strains will dominate the outbreak, can be tricky. However, Europe’s annual surge in influenza cases should not be a surprise. Not only does it happen every year, but no European country has reached its target for flu vaccine uptake, meaning millions of at-risk citizens are unprotected.

European countries aim to vaccinate 75% of people in vulnerable groups – such as pregnant women, older people, health workers and those with chronic conditions. A survey by the European Centre for Disease Prevention and Control (ECDC) shows that every country missed its target last year, some by very wide margins.

‘The best way to prevent or minimise severe disease from influenza among vulnerable groups is timely vaccination, even though the effectiveness of the vaccine varies depending on the virus in circulation,’ said Pasi Penttinen, ECDC Head of Influenza Disease Programme. ‘Sufficient vaccination coverage also saves healthcare systems money in decreased consultation rates and hospitalisations.’